A new comic! This chapter is taking a bit of a different turn at this point. I want to explore a little bit on Terry’s side of things. With Olivia and her friends having fun together at her house, Terry is busy working hard at the restaurant.

In this comic, he’s busy plating together a simple dish for a customer. Proud of his work, he places the completed dish up on the counter for the waitresses to take away. He yells very loudly. His voice is carried throughout the restaurant, enough to give the waitresses a bit of a spook every time.

Also, I drew another fun illustration of Risa and Terry! Have a look at it below. It’s very much in the same light as my summer Yogurt and Berry one! 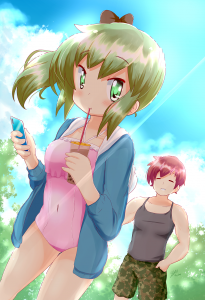